Kings Lynn Triathlon club had another superb weekend of racing and bagging that all important bling! 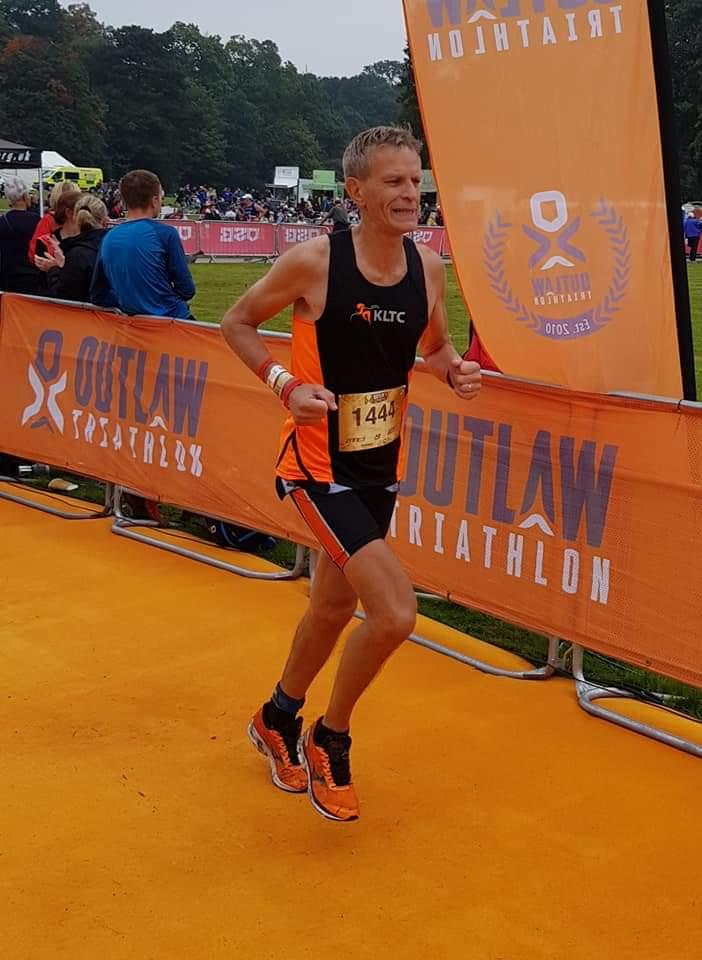 Sunday saw the last of the Coltishall Jaguars 10km series in Norfolk. This was a hot, unsheltered course that saw six club members perform superbly in stifling conditions.

First from the club to cross the line was Ian Kidman (47.02), proving that the sweltering heat was no match for such an elite athlete. He was almost caught up by one of the clubs newest members, Paul Dunthorne (47.41). Darren Elsdon was next home (56.05), secretly wishing he could swap places with his young son and run the 2km race instead! Not far behind came Stephen Pentland (1.05.11), chased down by his wife Alison Pentland (1.10.30) and pal Vicky Dunthorne (1.23.53). Vicky ran this series in memory of her granddad who was serving in the RAF during the war. Each medal from the three races symbolises the Battle of Britain. Dunthorne will hang her race medals with pride.

In the meantime two junior members Lola Kidman and Thomas Elsdon were taking part in the ‘Jolly Jaguars’ 2km Junior race. Thomas Elsdon finished 12th in a time of 8min 21sec. Hot on his heels was Lola Kidman who was the 6th girl to cross the line and finished 15th overall in 8mins 25 seconds.

Over in Sandringham, Spritely Debbie James was the only club member to run the Sandringham XC 10km race. She put in an outstanding effort, crossing the line in 48.26, earning her 28th place and once again proving that running is her forte.

Two members raced in Thoresby Park in Nottinghamshire which was the venue for the ‘Outlaw X’ triathlon. Warren King and Dave Neale completed the 1.2 mile swim, 56 mile bike and 13.1 mile run in outstanding times.

King is new to triathlon, this being his 1st season. He had no plans to take on a middle distance triathlon yet but stated ‘I just thought I would give it a go’. He crossed the line in an amazingly fast 5.39.20. Dave Neale shortly followed and crossed the line in six hours and 7 seconds earning him 6th place in his age category.

Over in London, the heat didn’t bother Maureen Wolfe or Kevin Cross as they were taking part in the two mile ‘swim serpentine’ event. Wolfe stated that this was her biggest challenge to date as swimming doesn’t come naturally to her. She decided to enter the event after suffering many running injuries last year. She completed the swim in 1.19.16. Meanwhile, despite going a little off course and for some reason known only to him, Cross swam straight into a boat! This didn’t dent his pride or finish time too much and completed the swim in 1hr 7 mins.

Last but not Least, Jenna Gotts undertook the 36km challenge in Disneyland Paris. This consisted of running 5km on Friday, 10km on Saturday and a half marathon on Sunday. She completed the half marathon in 2hours 10mins, earning herself 5 medals, 5 finisher T-shirts and many selfies with Disney characters!

Last weekend saw twelve triathletes and runners competing at the Hereward relays         Pictured from back row from the left are Nicola Kennedy, Richard Kennedy,...

King’s Lynn Triathlon Club members were present at three separate events over the weekend. The George Munday 10K, Shouldham Cross-Country, and the Thetford...

Last weekend saw the Elsdon family line up on the starting grid to race the run Silverstone event.        As the season slowly closes for...

Last weekend saw an aquatic theme and two newly born triathletes competing with KLTC.   The Serpentine is a 40-acre recreational lake in Hyde Park, London, England, created in 1730 at the behest...

Last weekend saw a full two days of events for KLTC members. Situated all over the country, from the stunning Lake District to Rutland waters, and Blenheim Palace.

SwimRutland    A warm, dry, and windy Sunday morning saw Michelle Convoy take on the challenge of swimming 2000 m across one of Europe's largest man made reservoirs, Rutland...

Notice of the King’s Lynn Triathlon Clubs Annual General Meeting 8pm, Thursday 12th Nov 2020 Via ZOOM because of Covid-19 Restrictions. We are pleased to invite you to attend the forthcoming...

ALL CLUB TRAINING CANCELLED UNTIL AT LEAST 30th APRIL As you know, we have tried to training sessions going for as long as possible but we have just received an update from British Triathlon...

KLTC and the Blustery day

Sunday 15th 2020 Kings Lynn triathlon club are proud to announce they have been awarded the bronze Trimark accreditation which enables them to have an official junior section. The accreditation...

At last!!! Members of the Kings Lynn triathlon club have come out of hibernation and scooped up some impressive medals! Sunday 8th saw the last of the Shouldham Warren grand prix series. Simon...

8th February 2020 Members of the Kings Lynn Triathlon club took part in the Rotary club’s Swimathon, which was held at St James pool on Saturday. The sixteen volunteer fundraisers were split into...

Ho Ho Hold on to your hats

Well, it is almost that time of year. Many have spent the last couple of months getting themselves ready for the big day, while most have left it to the last minute to get in to gear – yes, it is...

A weekend of awards and medals

Sunday 10th November 2019 The George Munday 10km race in Wisbech commenced at 1103 after all runners and race marshals observed two minutes silence as part of Remembrance day to honour all those...

Queens of the mud

Sunday 3rd November Debbie James (lover of all courses that are wet, sodden and filthy) once again did her club proud by coming 3rd in her age group on Sunday’s cross country race at Houghton Hall....

Sunday 27th October was the popular Fen 10, a ten mile run through Wisbech. Steven Bowdery, Nigel Banyard and Jemma Redhead ran for the KLTC on this lovely sunny morning. Bowdery had been taking a...

Half Marathon highs and lows

Sunday 13th October was a day of half marathon highs and lows for some members of the kings lynn triathlon club. David Hicks travelled all the way to Manchester to be one of 15000 people to take...

Sunday 6th October 2019 Nineteen members of the Kings Lynn triathlon club competed in the first of the Ryston runners cross-country grand prix held in Shouldham Warren. The torrential rain was no...

The weekend of the 14th and 15th of September 2019 saw members competing in England, Scotland and Wales! On Sunday, fourteen members raced in the popular North Norfolk Triathlon held in Wells. This...

It was a weekend of highs and lows for King’s Lynn Triathlon Club. Ian and Esmie Kidman were in the Lake district with Alistair Doig for Helvellyn Tri and its chilly 1.6km swim in Ullswater, epic...

Ali does some training

It was fun in the sun in Ely at the weekend for members of King’s Lynn Triathlon club and their friends from West Norfolk Swimming Club, with a sprint Tri for the adults and and aquathlon for...

Following a weekend off, King’s Lynn triathlon club were back in action for the Culford Summer Sprint Triathlon, a 300m pool swim, 21km bike around the surrounding countryside and a 4km run in the...

King’s Lynn Triathlon Club were out in force last Sunday at Box End park with 9 teams taking part in the Bedford Relays, including 2 youth teams for the first time. Teams of 3 swam 3x750m, biked...

There was only the one race at weekend for members of King’s Lynn Triathlon Club, the Victory SuperSprint Triathlon in North Walsham. Six members of KLTC competed in the 300m pool swim, scenic 17km...

It was another bumper weekend of fun for King’s Lynn Triathlon club, with the majority of the club either racing or supporting. The Outlaw Holkham Half was back for its 3rd year running, supported...

King’s Lynn Triathlon Club’s local heroes Jamie Sparrow and Dan Guppy were on top form at one of the area’s sporting highlights, the Norfolk Superhero Quadrathlon. Involving a 1mile swim from Gun...

One of the appeals of triathlon is the variety of races, and members of King’s Lynn Triathlon Club really took advantage of that at the weekend. Andy Wright was racing in Staffordshire in the...

Fun In The Sun for KLTC

With the triathlon season now in full swing, members of King’s Lynn Triathlon Club were once again out in force over the weekend. Debbie James raced her first open-water event at Blenheim Palace on...

Kings Lynn Triathlon club continued its run of podium finishes last weekend. Jamie Sparrow and Dan Guppy were both in Peterborough for the Monster Mojito.  The swim had to be shortened to 1.2km...

Club Success at Home and Away

King’s Lynn Triathlon Club were out in force again over the weekend. Matthew Allan was competing for teamGB in his second World Duathlon Championships, this year in Pontevedra , Spain.  It was...

End of the Month - April

April has been an interesting month with hot weather followed closely with the standard wind and rain!!. It also saw members completing Duathlons and the frist Triathlons of the season. Not to...

Members of King’s Lynn Triathlon Club have been continuing to making their presence felt on the duathlon circuit this year and Geraldine Jordan and Matty Allen were both in action in Peterborough...

With the Open Water Swimming season quickly approaching I want to take the opportunity to remind you all of the importance of making sure you are insured.  When training as a member of KLTC at...

Ok then a change of plan... instead of a weekly report my aim now is to update at the end of each month  Therefore the report for March will be a little disjointed as a number of...

Well the weekend just blew by (get it?...because of the strong winds?...no?.... alright then).  Congratulations go to Jemma Red for completing the MK half marathon in a shade under 2 hours...

Results from the weekend 9th - 10th March are as follows; Congratulations go to both Geraldine Jordan & Arthur Sargeant for their excellent times at the Ely Duathlon. Geraldine posted a...

Hi all.  As we now have a news feed on the new website I figured I would post a club update. Again massive thanks go to Alistar Doig for sorting the new site. Still have no idea how he manages...

Well that’s the first month of the year gone already!!!! I want to thank everybody for your continued support of the club. Its great to see so many people resubscribing or indeed subscribing for...

Thank you to all members who attended the KLTC awards night. It was nice to catch up with a great group of like minded individuals. Awards presented were as follows; Most improved male – Arthur...

From the Chair – Start of a new season

Hi all, I wanted to take this opportunity to let you all know what has been going on in the background with the club over the Christmas and New Year period. As you all know I have taken on the...

Saturday 7th January saw members gather for our annual Christmas meal and awards presentation at the Bank House Hotel in Kings Lynn. After a delicious meal the following awards where...